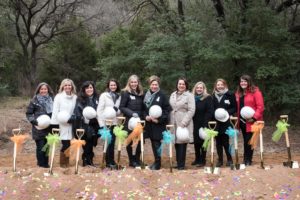 On Thursday, January 18, 2018, the Junior League of Austin broke ground on its new Community Impact Center. The 48,000-square-foot building will double as the League’s headquarters as well as a resource for the League’s numerous community partners. The new space will also allow The Junior League of Austin to expand its signature programs including Coats for Kids, FIT- Food In Tummies, and the newly announced KICS, Kids In Cool Shoes, which will pilot this spring.

Construction on the new Community Impact Center is anticipated to be completed by Spring 2019.